Akubra fur felt hats have been made in Australia since 1876 . They are amongst the most reputable and durable bush hats and cowboy hats available.

In stock
•••••
The Akubra Stockman is an Australian cowbay hat made of fur felt, featuring a 4" pinched telescope crown and a 3" raw edge brim curled on the side. 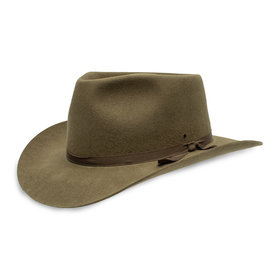 In stock
The Akubra Snowy River is a classic look from the Australian Outback featuring a 3¼" raw edge brim and a pinched telescope crown with a leather band. 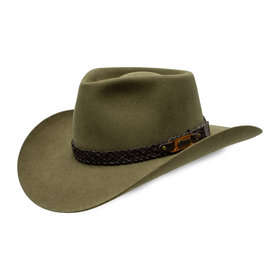 In stock
•••••
This Akubra hat typifies the fat worn by the Australian Cattlemen. Made of fur felt, it features a 3¼" bound edge brim and a vented pinched telescope crown. 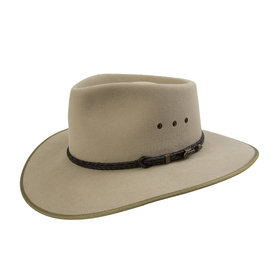 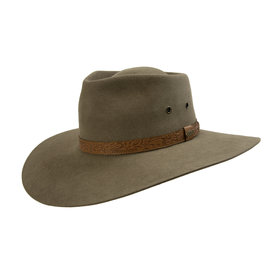 In stock
•••••
The Banjo Patterson is a versatile fur felt Akubra hat. Made of fur felt and adorned with a Barramundi skin band, it features a wide brim and a UPF 50+ rating. 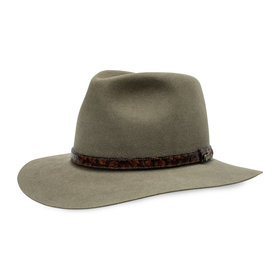 In stock
•••••
This ingenious chinstrap is made to be inserted in the sweatband of your Akubra Hat. 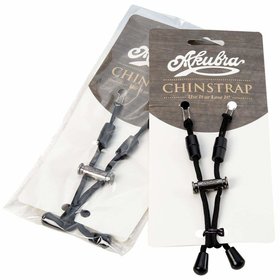 Out of stock
•••••
The Akubra Kiandra is a fur felt cowboy hat made in Australia. Features a 3" raw edge rolled brim and a 4" center dent crown, and a leather sweatband. 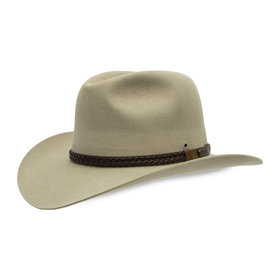 Out of stock
•••••
The Akubra Snowy River SE is a classic look from the Australian Outback featuring a 3¼" raw edge brim and a pinched telescope crown with a leather band. 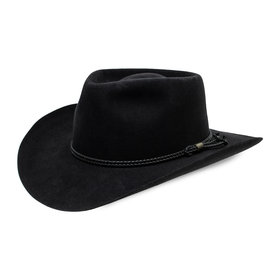 Out of stock
•••••
The Akubra The Boss wester hat is made of fur felt and blends American and Australian cowboy cultures with its telescope crown, curled brim and studded leather. 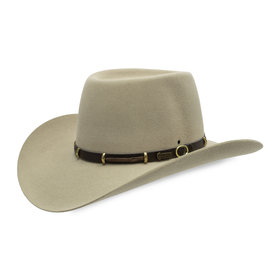 Akubra Hats for Men : An Australian Tradition since 1876

The Akubra hat company was founded by the Keir family in 1876 in Hobart, Tasmania’s capital city. Ever since, Akubra offers a range of felt hats designed for hard labor and to provide relief from the extreme Australian weather. Akubra hats are not made just for show!

Akubra hats are in their element in plains, bushes, ranches, and trails. Embrace the perfect alliance of quality materials and traditional Australian design and find the Akubra hat made for you on the online Henri Henri hat store with fast shipping!

America’s got Cowboys, Australia’s got Cattlemen

In very much the same way the American cowboys herd cattle and handle ranch work, cattlemen tend to Australia’s prolific livestock industry. Akubra hats are true to their roots and original purpose, so they can still fill the needs of thousands of cattlemen that need shelter from sun and rain, and a hat that can endure tough physical labor.

A Celebration of Australia’s Culture

The Akubra hat company pays homage to the giants of Australian literature and to the country’s breathtaking natural landscape. The Banjo Patterson hat was named after Australia’s most celebrated poet who wrote The Man from Snowy River, a poem after which the Snowy River hat was named. The Kiandra hat is named after a famous gold mining town during New South Wales’s gold rush.

What Are Akubra Hats Made of?

Akubra hats are made of rabbit and hare felt. Did you know that rabbits and hares are considered a nuisance in Australia? A relic of the country’s colonial history, rabbits and hares were introduced as game animals. The prolific animals are a threat to crops, as well as to native species. Rabbit and hare felt is abundant in Australia, and it makes for a tough, water resistant and highly durable felt. Akubra hats are finished with satin liners and durable, comfortable genuine leather sweatbands.

How to Clean an Akubra Hat?

To remove dust and dirt from your Akubra hat, we recommend you use a clean horsehair brush for brush the hat using short, vigorous strokes in an anti clockwise fashion to follow the felt’s grain. If your hat gets too dirty, stained or loses its shape after extensive use, do not hesitate to bring it to Henri Henri’ professional team of hatters to be cleaned and reblocked with our genuine 1930’s hand-carved wooden molds!