Discover the finest selection of men’s Deerstalker hats in Canada. This style of hunting cap originates from Scotland. Deerstalker hats are fitted with two brims and retractable ear muffs and were popularized by their association with Sherlock Holmes, the

Out of stock
•••••
The City Sport Sherlock deerstalker cap is an hommage to the famous detective. Brings a touch of mystery and vintage class to your outfits. 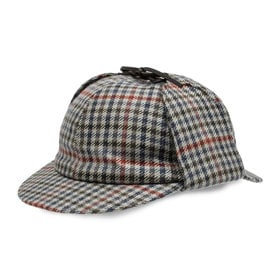 Sherlock Holmes is a fictional character imagined by Sir Arthur Conan Doyle. Since his first appearance in 1887, Sherlock Holmes has been depicted as wearing a trenchcoat, smoking a pipe and wearing the now iconic deerstalker cap. Find your own Sherlock Holmes hat among our vast selection of hats and caps!

Deer Stalking is a traditional Scottish hunt where a deer is stalked on foot, without the help of a hunting dog. The deerstalker cap is fitted with two brims to protect the wearer’s face and neck from the sun and rain, as well as with retractable ear muffs to keep the head, ears and cheeks warm.

Since his first appearance in 1887, the fictional private detective has sustained readers’ interest. Sherlock Holmes. In addition to the many novels by Conan Doyle, Sherlock Holmes has been depicted wearing his iconic deerstalker hat in plays, on the small and the silver screen, notably by A-list actors such as Benedict Cuberbatch and Robert Downey Jr. If you're looking for another style of vintage hat feel free to browse our selection of men's hats.