Adventure is waiting for you. Browse our selection of officially licensed waxed cotton, wool felt and fur felt Indiana Jones brand hats and be prepared to face anything the world throws at you! Find them on Henri Henri’s online store with fast shipping. 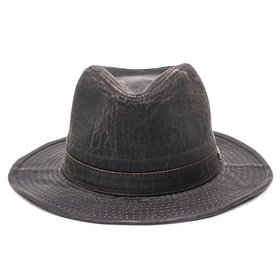 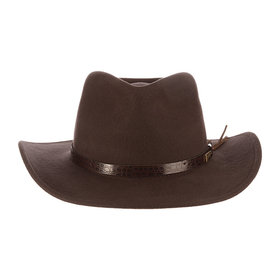 In stock
•••••
The Indiana Jones Wool Felt hat is an icon of the Raider of the Lost Ark presenting a 2 ½” safari brim, teardrop crown and leather sweatband. 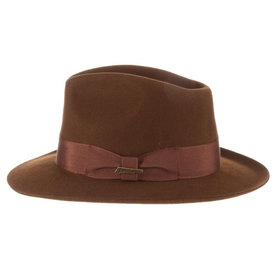 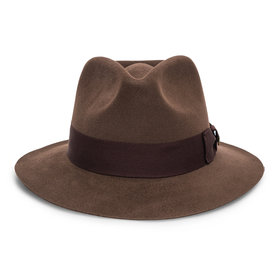 What is an Indiana Jones Hat?

Indiana Jones hats are officially licensed by DineyLucas® to bear the official Indiana Jones logo. The most knowledgeable Indy fans already know that in the movies, the adventurous archaeologist wore many different hats from film to film, mostly custom made.

Indiana Jones hats are based on the very first hat worn on screen and the one fans identify him with the most : the Raiders of the Lost Ark hat. Dark brown, with a downwards facing safari brim and a teardrop crown, these basic features are present on every hat of the Indiana Jones hats catalog, with variations in material for different weathers and different wallets.

Made of thick, tough wool felt, the Indiana Jones Wool Felt hat features the same shape as its fur felt cousin, and also shares its satin lining and leather sweatband. Its affordable price and high-quality construction make it an excellent, durable first hat!

The Indiana Jones Wool Felt Outback Hat is the softest Indiana Jones hat. Made of tough yet supple wool felt, it is crushable and packable. It features a low profile teardrop crown and a wider, curvier brim in the outback style.

Discover All the Hat Brands Offered at Henri Henri